“It was a anniversary event that Julie would have been proud of”, said Chairman Thomas Murrone as the sold out crowd at the Clarion Hotel celebrated 40 years of acknowledging the best of Bristol’s sports.

At the cocktail reception many reminised about the “Golden Age of the Bristol Tramps” as the committee debuted a video narrated by ESPN’s Chris Berman showcasing the organization’s history.  “The walk down memory lane was incredible”, said Marion Gifford daughter of Bristol Tramps founder Julie Larese.

Following  the family-style dinner, the scholarships and awards were presented to the 2010 class followed by comments from the honorees.  It was a night filled with great stories, some funny and others inspirational. 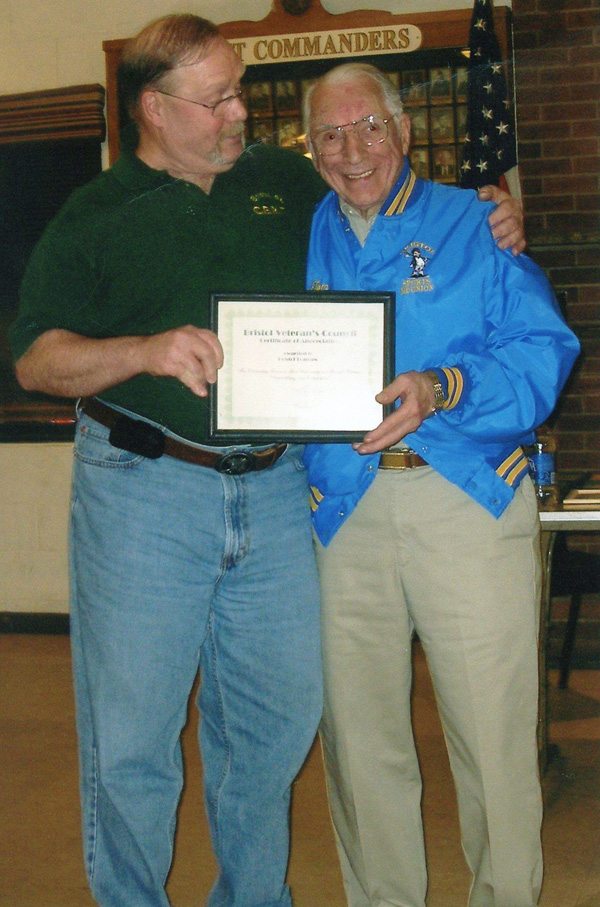 Tom Murrone, Chairman of the Bristol Tramps Sports Reunion recently accepted a Certificate of Appreciation from the Bristol Veterans’ Council.  The Tramps were awarded the certificate for outstanding service to our community and Bristol’s Veterans.  The Bristol Tramps provided a donation toward local cemetery flag holders in honor of past Executive Director, Tony Savino.

“You’ve come a long way, baby!” That’s a saying that’s been around a few years since the women of this country — and world — have joined in and have sometimes taken over what had been a man’s world. Fifteen or 20 years ago, the Bristol Tramps Reunion Dinner was for men only.

Now, not only have they broken the barrier, some have become or were members of the former all-male Tramps Committee.

Today, the executive director is Cathy Savino and three contributing women on the committee are Donna Papazian, Maryellen Holden and Caroline Ziogas, our most recent member.

Cathy says to look for upcoming information on this year’s program that will honor Bristol’s best, “those who have made contributions to Bristol sports.”

Remember to secure your tickets early, we expect a sell-out crowd and tickets may not be available at the door!

On Friday,  April 9, 2010, the Bristol Tramps will host the 40th annual Sports Reunion Dinner at the Clarion Hotel.

We expect a sell-out crowd this year.  If you are interested in purchasing a ticket, we highly suggest you contact a member of the Bristol Tramps Committee immediately to secure your ticket early–as seating is limited and will be first come, first served.  Also please note, the event will begin at 6:00 p.m.  Please plan accordingly.

The event began with the Pledge of Allegiance, followed by the invocation by Father Al Fontana of St. Anthony’s Church. Chairman Tom Murrone welcomed the guests and introduced Maryellen Holden as toastmistress for the evening.  Mrs. Holden introduced the dignitaries in the room including Mayor Art Ward, State Representative Frank Nicastro, former mayor Bill Stortz and recognized Julie Larese’s daughter, Marion Gifford.  She also reminded those gathered that in 2010, the Bristol Tramps will celebrate their 40th anniversary and based on the size of the crowd expected, to secure tickets to the event early.

Following a family-style dinner, Mayor Art Ward provided a welcome on behalf of the City of Bristol to the capacity crowd of 385+ guests.  A moment of silence was held on behalf of former Mayor Stretch Norton, who passed away early in the day.

Mrs. Holden asked all coaches in the room to stand and be recognized—and thanked them for helping to shape the lives and characters of the young people in our community.  In addition, all past recipients of a Tramps Award were asked to stand.  Among those standing was Pat Dyer, who at age 91, is acknowledged as the oldest living Tramp honoree and Dan Valerio, Co Chairman of the Tramps Committee at age 90. A moment of silence was held on behalf of the service men and women from Bristol’s military serving in Afghanistan, Kuwait and Iraq.

Scholarships and Awards were presented to the 2009 recipients.  Each gave a brief speech on their successes, thanked their families, colleagues and Bristol Tramps for recognition of their individual contributions to preserving Bristol’s Sports history.

The Bristol Tramps Sports Reunion Committee is planning for our 40th Anniversary Celebration in 2010. There are so many stories to be told and we want to hear from you! If you (or someone you know) have photos, stories or video that will help us showcase the amazing history of the Bristol Tramps, please email us via the ‘Contact Us’ section of our website.