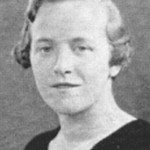 Lydia was born and raised in Bristol.  She attended Immanuel Lutheran School and Bristol High School.  In high school, she became known for her outstanding athletic abilities in tennis, volleyball and basketball.  She graduated in 1935 as one of the best female athletes known to Bristol.  In 1936, she broke the world’s single score record in duckpin bowling.  Lydia was the leading duckpin scorer from the 1930’s to the 1950’s.  Lydia was the first and only female to bowl in the “A” Mercantile League.  In the 1940’s, she captured 4 first place titles in the Ralph Strong Tennis Tournaments.  Lydia worked 40 years for the Bristol Board of Education before retiring in 1977.  Lydia is best known as the best all-around woman athlete of the time.  The nominee must be female and involved in athletics.